Rt. Hon Ben Bradshaw MP for Exeter and former Secretary of State for Culture, Media and Sport said: “I’m delighted that the Exeter Novel Prize is now an established part of our city’s cultural calendar and the fact that winners have gone on to be published is testament to its growing reputation.”

​First Prize - £500 plus trophy.
This prize is generously donated by Exeter Writers. Five finalists each receive £100 plus a trophy.
Winner
Rebecca Kelly - Skin-whistle.
Short List
​A Mother's Secret – Debbie Fuller-White
A Spoke in the Wheel – Kathleen Jowitt
Falling Forward – Emma Albrighton
Skin-Whistle – Rebecca Kelly
The Last Library – Freya Sampson
The Violent Hour - Sarah Dawson​
The award ceremony for the 2018 Exeter Novel Prize took place on 27th April. We missed two very significant people due to illness: Margaret James, from the CWM team, and our winner Rebecca Kelly. We didn't know, of course, that Rebecca would win, as Broo Doherty was saving that announcement until we had heard from all those on the shortlist. Before listening to their first pages and Broo's comments, we heard from Elizabeth Morton and Celia Anderson, two of our Exeter Story Prize shortlisters, both of whom have forthcoming novels, and Clare Harvey, winner of the 2014 Exeter Novel Prize, who read from her latest novel.
After Broo's announcement that the excellent Skin-whistle had won, the presentation of the finalists' trophies and the taking of many photos (see below), it was time for fizz, tea and much writerly chat. A wonderful afternoon! Thanks to Exeter Writers for the first prize and to all those who helped to make it such a happy event.
​Please scroll down for pics of the ceremony (click to enlarge), Broo's report and the long list. 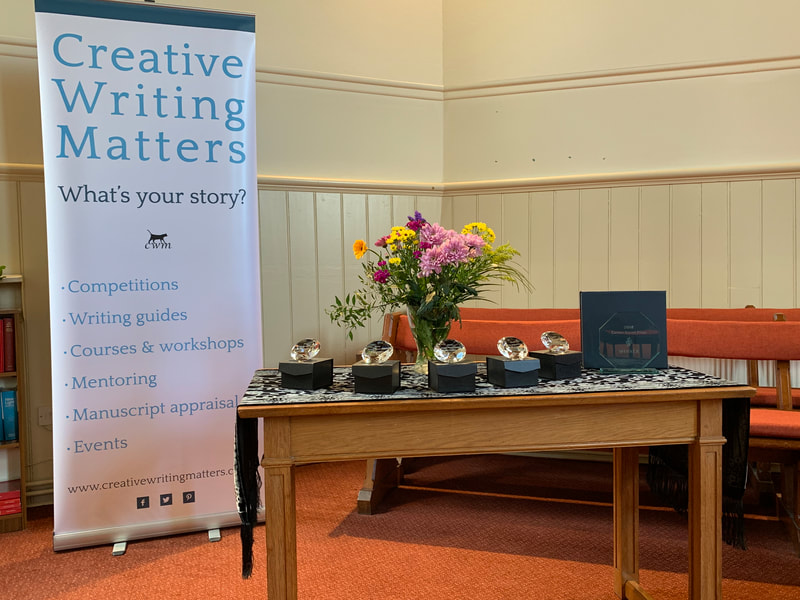 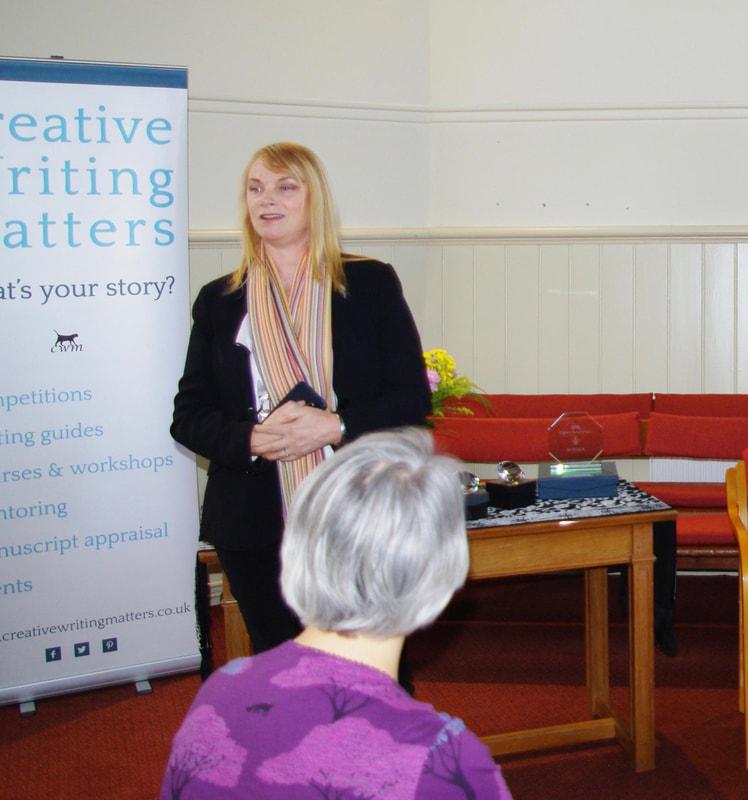 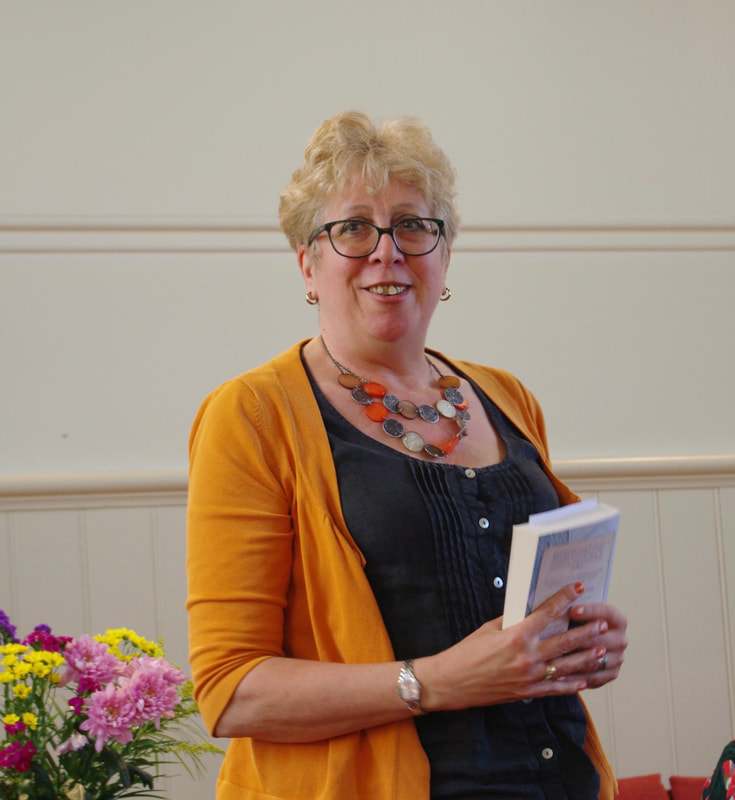 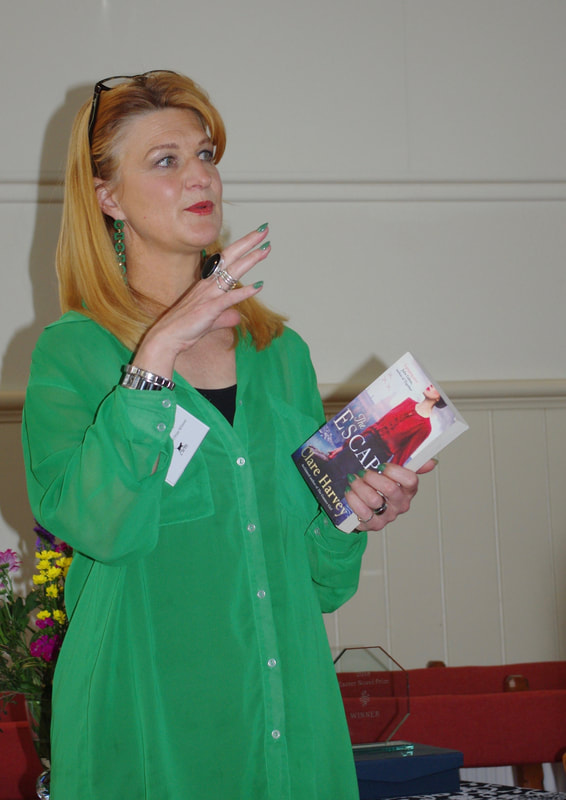 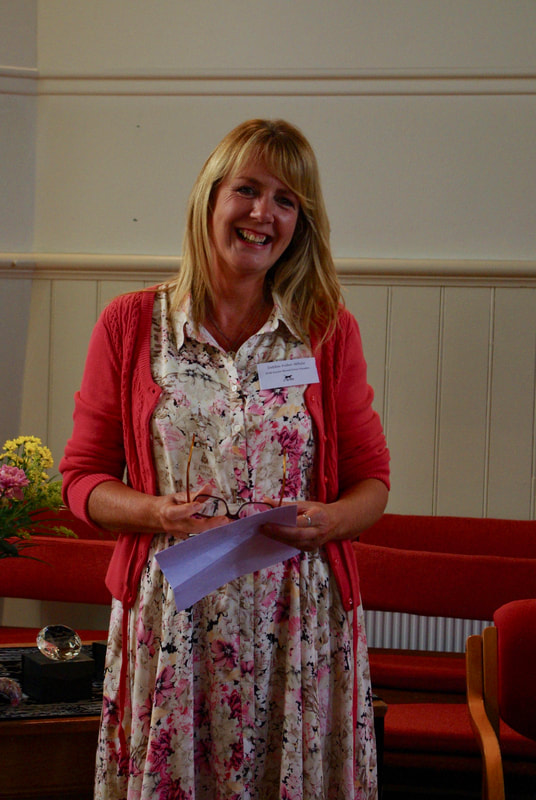 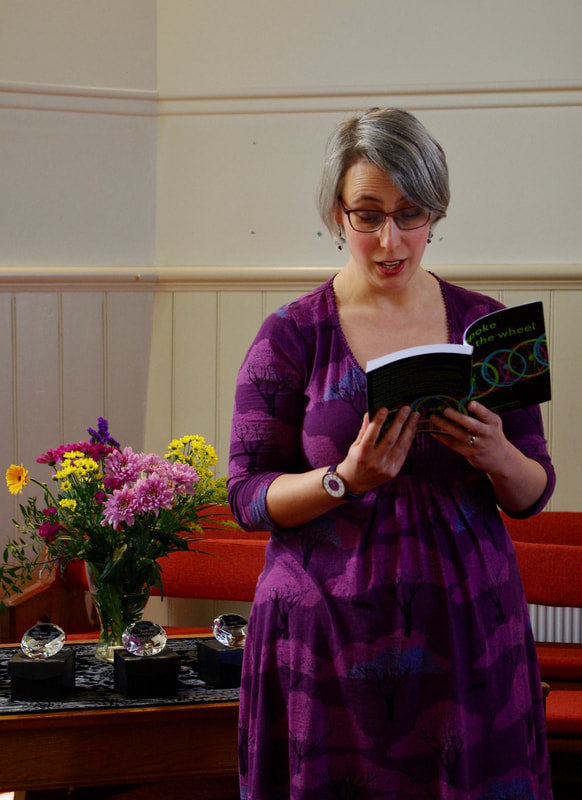 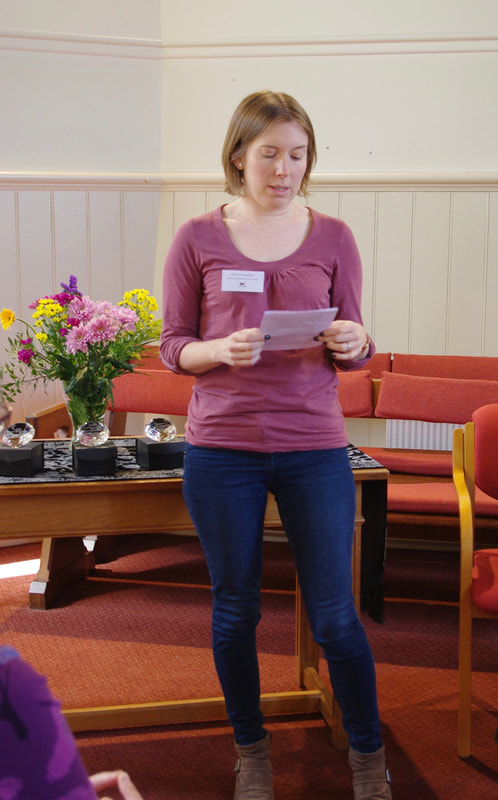 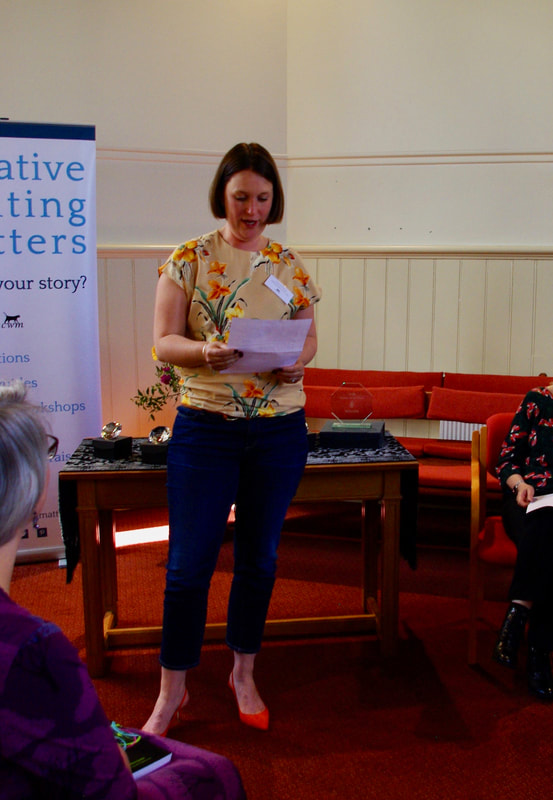 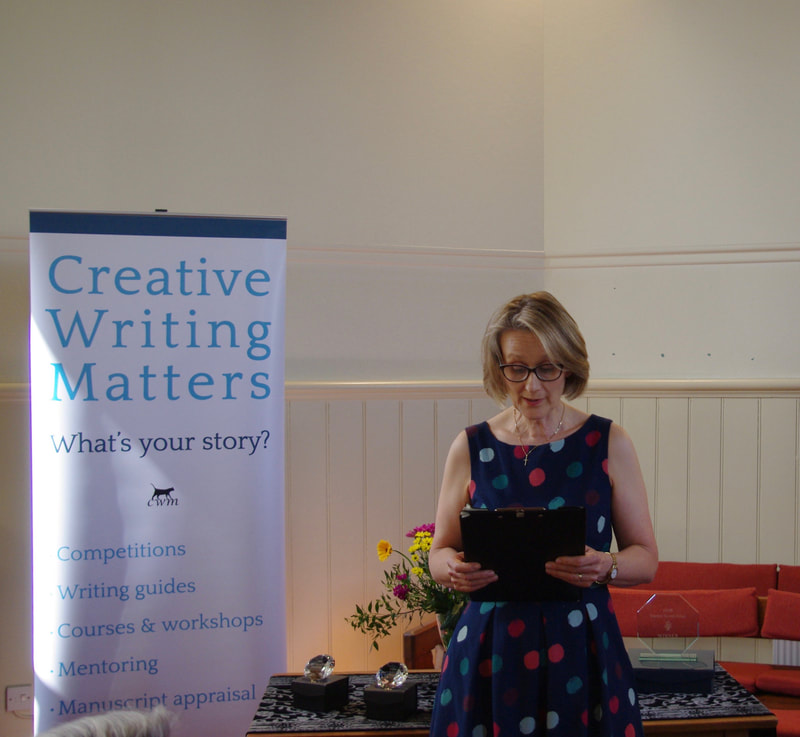 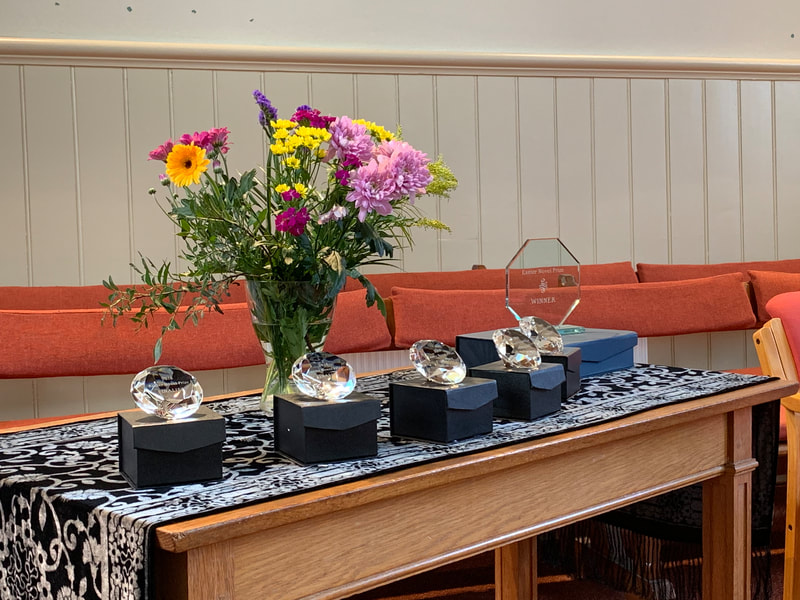 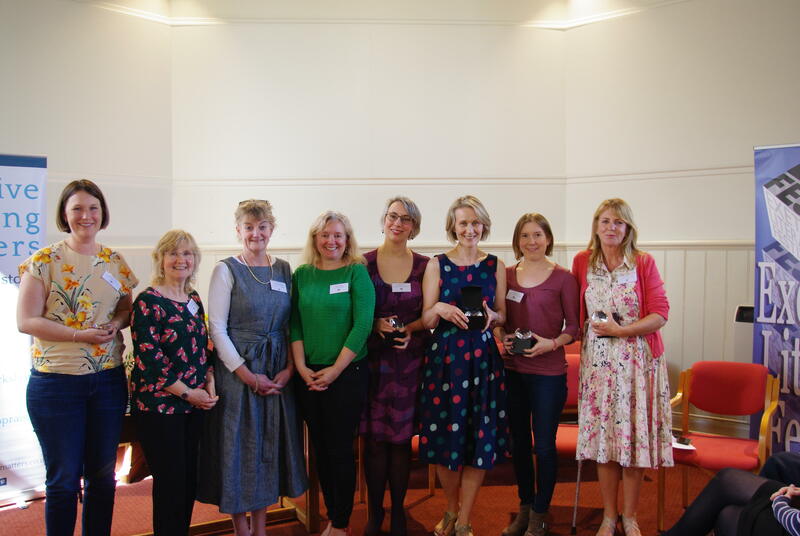 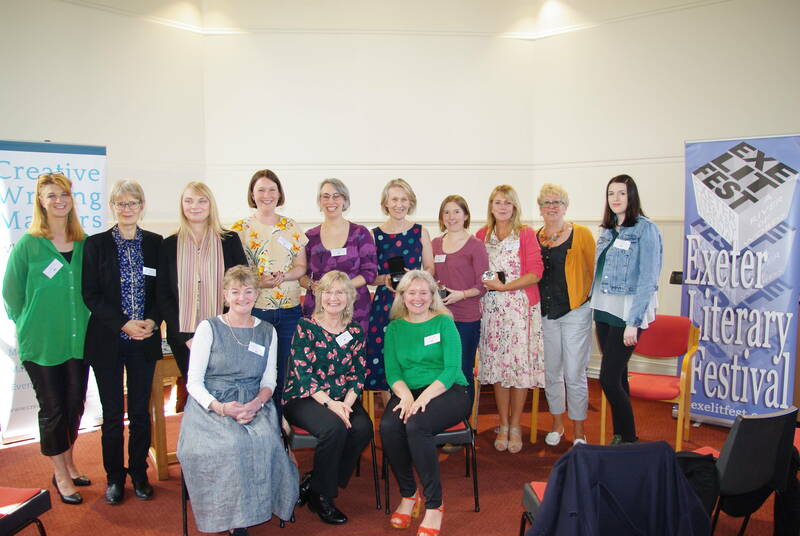 A Mother’s Secret by Debbie Fuller-White

A Mother’s Secret is set at the brink of the Second World War when Maggie Hainworth falls pregnant by John Thornton, a loveable rogue with an inevitable past. They marry in haste, so when John is pronounced missing, presumed dead at Dunkirk, Maggie falls into a depression. Unable to cope with looking after the baby, and her Grandmother’s incessant criticism, she elects to have the baby adopted. When her mother discovers what a radical step she has taken, she rallies to Maggie’s support and brings her back to the family home. Gradually Maggie starts the long slow road to recovery.
I loved the opening of this  - it is a classic saga populated by some lively and easily-identifiable characters. Maggie’s dad adores her, her twin brothers tease her mercilessly and her mother is evidently terrified that Maggie will attract some unwanted attention – which is exactly what she does. But the setting is real and accessible, and the writing draws you in from page one. Reminiscent in tone to books by Anna Jacobs, and Dilly Court,
A Mother’s Secret is a bittersweet story of love and family and how you can never quite escape the power of the past.

A Spoke in the Wheel by Kathleen Jowitt

When professional cyclist Ben Goddard is exposed by a positive drugs test, he leaves the sport, and starts a whole new life away from all things familiar.  He imagines that no one will recognise him and he takes on not one but two new jobs. But it’s not long before his cover is blown by two cycling fans: Vicki Whittaker and Polly Devine.  Vicki seem pretty easy go lucky, and is prepared to forgive him his past misdemeanours, but Pollyisn't just a cycling fan: she’s a former medical student with a chronic illness and strong opinions.
The three of them set up home together and their relationships develop and mature. In this feel good novel, Ben gradually restores his self esteem, and begins to learn that he isn’t the only person who has suffered life-changing incidents in his past, while Polly, mistrustful at first, has to appreciate that first impression are not always what they seem.

Set on the world of the homeless, research chemist Alex has been living hand to mouth on the street for a while, but now that the autumn is drawing in, he should seek safe haven before the chill of winter. But he is terrified about admitting the truth about his debilitating anxiety. On the streets, there’s no expectation and no one to disappoint. One morning he meets fashion designer Becca, who treats him like a human being. She quizzes him on his knowledge of smart materials, but his brush with real life triggers a panic attack and Alex retreats to his sleeping bag. But Becca is not someone who gives up without a fight. Realising that Alex has the brains to help her and her company construct something magical, she pursues him, and it is only as they grow closer, that Alex is prepared to reveal his hideous secret.
Moving and heart-rending in equal measure, this is a brave and forthright book about what it means to be homeless, and the lengths to which people will go to protect those that they love.

Skin-whistle is a ghost story set in the late 1800s on a remote Scottish island. Elsbeth is in her early twenties and is riddled with guilt, having failed to prevent the death of her beloved sister. Her parents died several years earlier, so she welcomes a fresh start on Skelthsea Island, employed by Violet O’Donaghue as nanny to her orphaned niece, Mary. Ten-year-old Mary has been mute since her twin brother, William, fell from cliffs four months previously. When Elsbeth arrives she realises that life within Iskar Manor is not quite as comfortable as she had imagined, and she is troubled by unsettling and inexplicable incidents. She learns that William, far from being an innocent, beloved child, was in fact feared for his cruelty. Elsbeth discovers that some on the island believe that William was murdered to bring a halt to his godlessness. A maid however, believes that William witnessed something so dangerous that it cost him his life.  As the story unravels we learn that Elsbeth’s questions are unsettling the rest of the island and the strange ghostly occurrences are perhaps someone trying to warn her away from the island.  When she discovers a skin-whistle among Mary’s belongings, an instrument used to summon the dead, she thinks that it is time for her and Mary to leave.  But she makes the decision too late and before long both her’s and Mary’s life are seriously under threat.
Evocative, atmospheric and eerily compelling, Skin-Whistle is an engaging novel, reminiscent in tone to Laura Purcell’s The Silent Companions and Su Bristow’s Sealskin. Haunting and intense, Skin-Whistle is a powerful novel destined to send shivers down your spine. The island itself is beautifully portrayed and the individuals living there gradually get under your skin and become all too memorably real.  Powerful stuff.

The Last Library by Freya Sampson

A love-song to libraries, The Last Library explores themes of loneliness, self-esteem and community activism. Reminiscent in tone to Lizzie Lovell’s The Juniper Gin Joint with a nod to Eleanor Oliphant, this is an entertaining and lively novel about one woman’s campaign to save the local library in Chalfont. June and her mother, now deceased, have worked there for years, so when it is threatened with closure, it shakes June and her colleagues to the core.   June operates within a very small canvas, daydreaming about her customers lives through their book choices, and returning home every evening to eat Chinese takeaways with her cat.  She has no self confidence, no self esteem, and it is only when the library comes under threat that she is galvanised to set up an account on social media to save the library.
The whole sense of community working together is very well portrayed, the disparate group all fighting for something they believe in regardless of age or class, has some wonderful comic moments, as well as revealing more about their individual personalities, their lives and their relationships.  Inevitably, good wins out and June discovers that she has more confidence than she ever imagined, but the journey through sit-ins, council skulduggery and double crossing is extremely well conceived. A fun and topical novel, it reminded me of the value of libraries and why they should be protected at all cost.

The Violent Hour by Sarah Dawson

A YA novel focusing on our protagonist, the stroppy sixteen year old Violet who hates her mother Maggie, because she feels that she killed her husband through her continuous nagging.  Missing her father enormously, Violet threatens to run away, and so Maggie acquires a greyhound for her, believing that if she has a dog she won’t leave home.  Rufus is a one eared greyhound and Violet adores him.
One day on the common, Rufus is let off the lead, and Violet finds him digging under some trees, only to realise that he has unearthed a human corpse.  From there on it becomes an investigation into who the woman was, why she was killed and by whom. But there are some lovely touches, some humorous moments, some great eye for detail, and the story becomes a crime novel, with Rufus playing a leading role – which is enchanting.  The dynamic between mother and daughter is realistic, the misunderstandings between them heart rending and ultimately Violet has to grow up and accept that perhaps there are shades of grey in the adult world, which until recently she’d failed to understand…

Long List
A Mother's Secret – Debbie Fuller-White
Artemesia – Jean Burnett
A Spoke in the Wheel – Kathleen Jowitt
Cuckoo – Glenda Cooper
Death for Beginners – Kathy Hopewell
Falling Forward – Emma Albrighton
Lovedie and the Crows – Julia Kelly
Magpie – Caroline Roope
Melting in the Middle – Andy Howden
Siblings – Catherine Wright
Skin-Whistle – Rebecca Kelly
​Take Me, I'm Yours – Lizzie Lamb
The Accidental Time Traveller – Sylvia Bluck
The Displaced Person's Unit – Sylvia Bluck
The Boys from Bramblemouth – Poppy Clarke
​The Bristol Diamonds – Chloe Turner
The Home Fires – John Richardson-Dawes
The Last Library – Freya Sampson
The Nightingale Sings at Night – Abigal Johnson
The Spell of Ojha – Jane Bheemah
The Violent Hour – Sarah Dawson
The Wharves – Christopher Williams
Till the Cows Come Home – Lesley Rigby
Two Like Me and You – Chad Gibbs
What's Wrong With You Marty Farrell? – Paul Barnett
The competition is for the first ten thousand words including synopsis of a novel that has not been accepted for publication by a traditional publishing house. It is open to all authors who are currently without representation by a literary agent, whether or not they have been published.
We are delighted that London literary agent Broo Doherty of DHH Agency has agreed to undertake the final judging again and will present the trophy at the award ceremony on 27th April 2019. You can read about the previous winners by clicking HERE and for the award ceremonies and the judge's reports. Click  2013, 2014, 2015, ​2016 and 2017