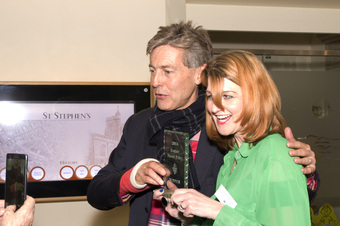 Rt Hon. Ben Bradshaw M.P. with Clare Harvey
Winner - Cage the Minute by Clare Harvey (renamed The Gunner Girls and to be published later in 2015)

London 1941 and three girls from very different backgrounds join the Auxiliary Territorial Service.  Sixteen year old Vanessa Tucker witnesses a bomb dropping on her family home, killing her parents and her older sister Joan, and as a survival tactic retrieves her sister's sign up papers from the rubble of her home.  She reports for duty the following day where she meets Edie, who has enlisted against her parent’s wishes, and Beatrice, a single parent who is waiting anxiously for her fiancé
to return from the front line. The novel traces their tumultuous relationships throughout the war as the three women forge a strong friendship and are able to help each other discover the meaning of true friendship and love.  The novel has some excellent period details and a real sense of authenticity.


Finalists (in alphabetical order of title)

Daughter of the Brigantes by Helena Fairfax

Two teenagers separated by race, religion and two thousand years form a bond against the backdrop of Hadrian’s Wall in this YA time-slip novel. The narrator, an adopted girl of sixteen can't understand why she is so different from her friends, and after an unfortunate series of events, ends up in a psychiatric unit suffering from depression. She keeps a diary and it is only there that Bridie recounts meeting ALATOR, a powerful Druid from the Brigantes tribe, arrived from the past to seek her help. The Romans are destroying his people.  He needs Bridie's help as she is a descendant of the Brigantes and that she possesses Druidic powers. A powerful novel written in a colloquial and conversational style this is a novel about identity, family ancestry and religious fundamentalism.

On her mum’s death, sous chef Polly Hanson learns she may be hotelier Charles Hetherin’s illegitimate daughter. Having grown up watching her mother do without, Polly’s furious. The Hetherins have it all, including fabulous Hetherin Hall country house hotel. And Polly is going to stop at nothing to discover whether or not Charles is her father.  But truth is stranger than fiction, and it is not long before Polly finds herself caught up in a complicated family web. She finds herself working as a waitress at Hetherin Hall, and gradually discovers that no one is quite who they seem.  Luckily her cooking skills stand her in good stead, and only once Polly has unravelled the truth is she able to put the past behind her and move on. A lively, humorous novel with some cracking one-liners, this is a novel that exposes just how damaging family secrets can be, and how honesty in the long run has to be the way forward.

Surgeon Lieutenant Commander Andrew Sarvent was only 28 years old when he was deployed to Afghanistan with 3 Commando Brigade Royal Marines in 2012. Assistant to the Senior Medical Officer in Camp Bastion, he was the youngest Medical officer to ever hold such a position. One day while working with part of a MedeVac team he goes to the rescue of a man badly injured.  He is horrified to discover it is his oldest childhood friend, Darren Harper, whose abdomen has been blown to pieces and he is slowly bleeding to death. They had lost touch years ago, and Sarvent hadn't appreciated that Harper had joined up - but he comforts Harper as he dies in his arms.  That night filing in the forms to record Harper's death, Sarvent remembers with the help of a bottle of Jack Daniels, their childhood together, the bullying that Harper protected him from and their joint love of falconry. A moving tribute to childhood and unlikely friendship, Precession focuses on the meaning of ambition and aspiring to a better life, together with one man’s slow awakening to the futility of war.

The Days are Falling in by Beverly Stark

Set during the turmoil of the early 1940s, The Days are Falling In explores the wartime pressures on the young and how couples ‘stayed together by airmail’ during long months of separation. While at school at Ashcombeleigh, a private school, James Ainsley falls in love with his headmasters daughter, Kate, when she cleans him up following a brutal attack from the school bullies. When he leaves school he joins the army and aged twenty, sees action for the first time at Cassino in Italy, one of the bloodiest battles of the war. He comes to depend on letters from Kate, his housemaster’s daughter, to keep his hopes alive. But given the circumstances and the fact that every young person knew that each day could be their last, their relationship was constantly under threat.  An involved and heart-warming evocation of the Second World War and the value of true love, The Days are Falling in captures the spirit of war in beautiful detail.

The Mistakes of Fred Underwood by Bert Tyler-Moore

A metropolitan contemporary love story surrounding Fred and Hannah, brother and sister, who seem to have everything sewn up in terms of relationships - Fred is in love with  and Hannah is in love with Jamie.  It's the summer of 2009, the barbeque summer, and the world is looking perfect for this talented group of friends.  However, all is not quite as it seems, and when Hannah starts talking about moving to Amersham, and having a baby, and Fred's eyes start roving, you realise pretty quickly that these relationships aren't quite as secure as these characters would have you believe. Witty, humorous with an excellent eye for detail, The Mistakes of Fred Underwood is an absorbing read which analyses the meaning of friendship and the overriding power of love.