The Award Ceremony of the inaugural Exeter Novel Prize took place on Saturday 22nd March in the beautifully restored St Stephen's Church.
Exeter's M.P. Ben Bradshaw gave a wonderfully supportive speech about the burgeoning cultural life in the city and the significant contribution of our novel prize.
We were very pleased that Broo Doherty, our esteemed judge from the DHH literary agency in London came to present the prize. Her appraisals of all the short-listed novels were both perceptive and inspiring. 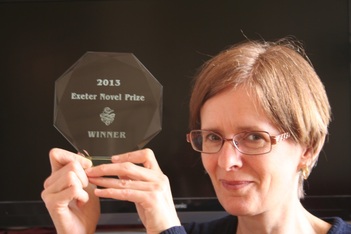 Su Bristow
The tension grew as the strength of all the novels on the short-list became apparent.
But only one person could go home with the trophy.
Our heartfelt congratulations to Su Bristow for her novel Sealskin. Her hauntingly beautiful re-telling of the selki myth was described by Broo as compelling and magical.
The inaugural Exeter Novel Prize trophy, despite receiving hundreds of entries from all over the globe and a very rigorous and impartial judging regime, would stay in its home city.
Su lives and writes in Exeter. Su was presented with her award amidst much cheering and applause.

Set in a remote bean farm in Louisiana in the 1970s this novel addresses major issues of racism, isolation, politics and the fragility of relationships.  It is a fascinating study about how lonely you can become if you live in the Deep South, and how important it is to fit in and conform. Darlene McCann has her life thrown into relief when her husband and she pick up a couple of backpackers and take them home with them, only to discover that their rather more open-minded views aren't designed for Louisiana.   Beautifully written with some intriguing relationships this appears to have the makings of a meaty provocative novel.

Set in Brighton in 1915 this is the story of how fifteen-year-old Florrie Johnston has run away from home to avoid marrying her bullying cousin, Tom. She auditions to Greville's Revellers, a concert group who perform on Brighton Beach, and despite being underage Jack Greville takes her on.  This has an authentic sense of time and place - wartime Brighton is beautifully encapsulated, and I thoroughly enjoyed the rough and tumble of the revellers and their developing relationships.

Heather Read - A Puff of Madness

A Crime novel that opens with one of the most dramatic scenes I've read for a while - twin girls jump off a bridge crossing the M5 near Bristol and only one of them survives. the curious thing is that the twins don't seem to know one another.  And so begins an investigation involving the psychiatrist Rubin Quinn,  an inspector detective David Millar and before long, a French psychiatrist, Delphiine Guillot.  It appears that she has been investigating a similar case in France  involving twins who have been separated.  I found this compelling and intriguing - given I am fascinated by twins and there is an extra sci fi element that is woven into the whole plot with great skill.

The story is based on the Scottish legend of the selkies, seals who can take on human form.  It is set in a fishing village on the West Highland coast, in a world where magic is very close to daily reality. Donald, the local loner, goes out fishing one September night at full moon and he witnesses the most extraordinary phenomenon - nine seals who come ashore and shed their skins, turning into beautiful young women.  He is so captivated that he hides one of the skins, and when the relevant young woman realises what has happened she is terrified that she can't return to her seal-like form, but Donald takes her home to live with him and his mother. This is the story of their lives together, how they eventually fall in love, but the lure of the sea is ever present, and Donald knows only too well that she was taken by force.  Intriguing, hauntingly written and full of insights into the politics of a small remote community, this is a magical novel, that does justice to the myth that must survive today.

The novel is aimed at young adults, and is told through the eyes of Lily, a fourteen-year-old girl who is wildly jealous of her older, cooler sister Danny.  The sisters live separately with divorced parents, Danni  lives with their successful  father in a riverside apartment while plain  Lily,  lives with their mother in a tiny flat over a high street shop.  But Lily has a dark side.  Wildly jealous of Danni and craving her father’s attention, she plots the perfect murder.
And as the police investigate the crime, Lily comes to realise that life isn't always quite as clear cut as you imagine and perhaps her own life hasn't been that bad after all.  Humorous, lively and very witty, this is a clever and thought provoking novel that addresses the issues of sibling rivalry and parental love, and difference between fantasy and reality as seen through the eyes of a maturing young woman.

When Jane retires, she recognises that professional success has been a poor substitute for a lasting marriage and a family. She resolves to try and turn her life around. She tried internet dating, various clubs, Weight Watchers, has a series of unsatisfactory relationships, believing that this is the way forward, but ultimately she realises that life is to be lived, and if you are happy with yourself you are far better equipped than most to have a peaceful and inspiring life, with friends and family.  Moving, full of insights into the aging process with the odd dollop of humour in the form of Jane's mother, this is a entertaining and realistic look at life as we all get older.

A Puff of Madness – Heather Reed

I wish, I wish – Sarah Palmer